Today’s rant comes from an image gleaned from Facebook, I will post photo credits under it. It’s not often that I will plagiarize someone else’s work, and if not for the message that needs to be heard I would never consider running a story like this.

It blows me away when some aboriginal communities were begging for police protection, we had nothing but insults hurled at our local police, instigated by the leaders of the Hooligan’s Hotel on the Morice River. 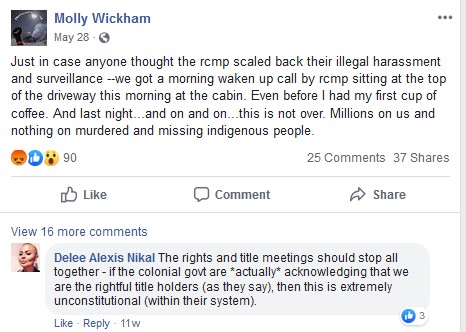 I can give you dozens of similar screenshots from both Molly or Freda, but I do not want you to miss the point of this rant.

The video above was not local but from the radicals fighting Trans Mountain Pipeline, however the behavior is quite similar to that experienced by officers in the north. The problem is feared perception of the law, is what allows this criminal behavior to have become a norm for some. If police do take action its an instant case of discrimination, yet no other nationality in Canada is afforded this kind of privilege. Some First Nations elders and chiefs condone or even encourage this rude behavior.. Her name is Kanahus Manuel (one of her online names) a well known very verbally explicit woman that should be in jail.

Despite what this crazy lady says, the RCMP are required and expected to patrol this reserve, the reserve has never asked the RCMP to stop patrolling or preventing crime, or attending acts of vandalism or violence here. But this trash talk is common abuse almost every officer is exposed to. Damned if you do, damned if you do not.

The abuse you hear in the video, is something almost every officer working near aboriginal communities is used to hearing, its rare to get self admitted footage, bragging about this as seen in this video. Likewise its also symptomatic of violence on the reserves, by both men and women.

This is verbally violent  First Nations members making all First Nations people appear like uncivilized savages. They do more to harm the image of good people trying to get ahead in life regardless of race and impose this kind of behavior on other First Nations members as well. There is no honor is stooping to this low level behavior, it results in dragging everyone down.

It’s naive to think that a person can repeatedly be exposed to the worst day of other people’s lives and go home unscathed.

No one should witness the aftermath of a child’s accidental death at the hands of her parent. Give narcan to the same addict as last week only to have them come back to life – swinging and furious – just like last week. Comfort a new widow, courtesy of suicide. Realize the young woman who wrapped her car around a tree is a nursing student, while your own girlfriend is in her third year. Perform CPR on a deceased, frail senior citizen, because the family begged you to do something. Be surrounded by confrontation, aggression, and entitled stupidity each day.

I didn’t make these calls up, nor do they reflect the worst he has seen.

Rarely has his trauma shown up as reliving the call or flashbacks, like in the movies, but it’s fair to say that K is haunted by these calls just the same. Inexplicable bouts of anxiety. Difficulty being present. Poor distress tolerance. He recently told me that the fear of creating a new horrifying memory makes him dread going to work. He doesn’t want another call to take more from him. To challenge his humanity. To threaten the little peace that he’s worked so hard to find.

So give yourself grace, dear officer. Accept that you have been affected. Know that you are far from alone in feeling this way. Connect with others to decrease stigma within the service and normalize mental health concerns. Lastly and maybe most importantly, tell your loved ones that you don’t feel like you. I promise that they’ve been waiting to hear that for longer than you know.

Our police are our last line of defense, they are there to protect us, and not serve as whipping boys for career protestors.