The EcoActivist profile of Shannon McPhail

Shannon McPhail – Unfortunately you cannot talk about the Skeena Watershed Conservation Coalition (SWCC) without first pointing out that her father is one of the founding members, (and also ranks as one with the highest level of conflict of interest) and remains largely on control of the organization. In name the organization may appear to be a group effort, but it primarily does what Gene Allen dictates.

The primary objectives of their organization are to block development  by TransCanada and the Prince Rupert Gas Transmission (PRGT) and the proposed Pacific Northwest Liquefied Natural Gas (LNG) plant near Prince Rupert.

Shannon McPhail, executive director of the Skeena Watershed Conservation Coalition (SWCC) she is the daughter of, Gene Allen, is a former logger whose family owns the Bear Claw Eco-Lodge on the Kispiox River. Gene Allen made his family fortune logging the Kispiox valley, and now wants to protect his new assets by preventing anyone from doing the same. Skeena Heliskiing operates from the exclusive Bear Claw Lodge, owned by Gene and Joy Allen and run by the Allen family. Gene Allen is also a rodeo stock contractor and maintains an active trapline. Gene worked as a logger and guide outfitter for most of his life and lives on his horse ranch in the Kispiox Valley. He is a leading member of the Kispiox Watershed Monitoring Committee and the Skeena Quality Waters Initiative.

Gene was also a leading campaigner against the clear cutting of the headwaters of the Kispiox River after he made his fortune doing exactly the same thing, he was successful in creating the Swan Lake Wilderness Area, preventing other such development from proceeding. (again to protect his new business ventures)

Here is an example of how the conflict of interest by Gene and his family becomes clearly apparent, from a news clipping. Clearly it’s not so much about protecting the environment as it is about protecting his personal assets.

“Ms. McPhail’s father, Gene Allen, is a former logger whose family owns the Bear Claw Eco-Lodge on the Kispiox River, just a stone’s throw from the drilling. The lodge hosts guests from around the world and employs dozens of locals in what Mr. Allen calls “sustainable jobs” based on the bounty of local rivers.”

Shannon McPhail is also Volunteer Executive Director of Rivers Without Borders another Eco-Radical group north of our region, and a director in the Seed the North, Inc.

Shannon and her crew at SWCC have been campaigning to “protect” the upper Skeena from Royal Dutch Shell’s coalbed methane proposal.  Note the term “Sacred Headwaters” is yet another stunt term, no such sacred waters exist. There is nothing sacred about the head waters of the Skeena, unless you wish to call the watershed of every river in the world “sacred.”  The word project has to be taken with a grain of salt, BC has some of the most rigid environmental laws on this planet, so when they say protect, it really means blocking industry.

They are a master of the written word, and could tun bullshit into gold nuggets, look at this line. “These rivers are among the last surviving intact, kick-ass, grizzly bear chasing 30-pound salmon over waterfalls kind of rivers. Native and white families harvesting enough food for the winter kind of rivers. Dip your head in and drink the water without tablets or filters because it’s so clean kind of rivers.” There is no such thing as a river that has fish carcasses after spawn that does not carry the risk of beaver fever. They just invent this bullshit and city folks eat it up like lapdogs.

The propaganda smear by leaf lickers has turned to creating fake concepts. The first words so often used by these people is that they are protecting something, then adding on a religious overtone that a given section of a watershed has obtained “sacred status” we are seeing the usage of the term more and more as a demand of zero development. Keep in mind there are 3 primary watershed in the province of British Columbia, and they have the largest catch basins as well. It is from where all of the water, rain or snow begins its journey to the ocean. Once you declare the headwaters sacred, in actual fact you have now claimed all of the land, inclusive of cities, towns, villages, cess pools, sewage lagoons, cow pastures, all part of the same watershed, as somehow now being sacred, thus off limits to industrial growth. They make this all about them Goliath vs us the little guy, when in fact we are talking about less that 100 people in British Columbia standing in the way of jobs, tax funding and way of life for all British Colombians.

Also see Connecting the dots…. The modern art of Deception

We recently found the following video (A Raven Trust Production) so full of lies, its hard to believe people can post stuff like this and get away with it, then I discover she is on the NWCC board (now Coast Mountain College) not voted in by the public but appointed the NDP government. So now we have activist environmentalists in positions of control in what was supposed to be OUR community collage.

Watch this video, its disgusting full of lies and appalling, doing a promo for a chicken farm. At $5.50 a lb you have to be in an elite income class to be able to afford eating these chickens, so how does that make this food security for the people of the north? So the argument she makes is now that we do not have salmon, we can have chickens. We bought whole chickens at Jerry’s for 2.97 per lb. Now I have no objection to people selling local grown chicken for more, but making the argument they are replacing our required food supply is just pure bullshit. (no other word for it) I don’t know how much is in your wallet but the price range of these foods is way out of my budget range and I survive on a pension. It shows you how much money the Tides Foundation puts in the pockets of these Eco-activists. 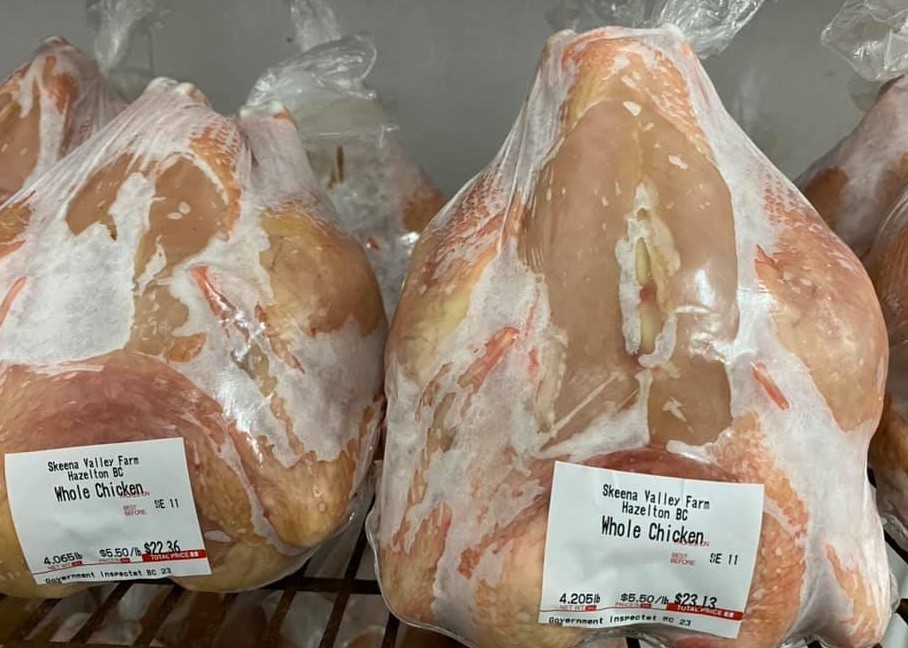 Shannon speaks during the first 10 minutes of this video. Note her talking about the way the rains turned the farm into mass soil erosion right next to the Skeena River with zero mitigation then raise holy hell about CGL for doing a poor job on soil erosion. We put people like this in charge of our community collage? The second part was done by Eco-radical Keisi Nagata speaking on behalf of the Eco-radial group Raven Trust. Keisi ‘s brother is Kai Nagata is a director of Dogwood Initiative another Eco-radial group. The last speaker was Jacob Beaton is a former communications consultant, who in not even Gitxsan but fought bitterly to stop LNG development in particular the Prince Rupert Gas Transmission project, and against the Gitxsan leadership that supported the development. (Sounds like this chicken farm is a Tides Foundation gratitude payment.)