I will not mince words here when I say that the blood of the victims is being used by eco radicals to sell society on stopping industry from developing. You can hardly read anything they write without citing the blood of the victims as a reason to stop projects. As the subject keeps coming up over and over again we felt it was time to address the facts, and I put out a challenge to them to prove otherwise. We are not afraid of the truth, I am not so sure we can say the same about them.

How sick to the stomach would you be if the role was reversed, that we used the blood of victims to promote oil, gas or mining or forestry? As a society we would be furious at the abuse of using victims to promote a cause. The red dress campaign was stolen by Eco-activists from its original intent, the Red Dress project was created by artist Jaime Black as a way to bring more awareness to the issue of missing and murdered Indigenous women and girls and it continues to do so. “It’s about bringing awareness to those women who have gone missing, who have been murdered, who we’re still searching for, to bring awareness to our communities, to bring awareness also to our families and the continued struggle and grief that they are experiencing and wanting to give acknowledgement in a respectful way and tell our stories,” said Geesohns Manitowabi, an organizer of the event.

It is not about laying blame at the feet of those who built this nation, it was never intended to be used to blame non aboriginals, the fact is the majority of solved cases prove the problem lies within our own communities, by aboriginal people. Its the horrid truth we do not like to confront.

What the red dress campaign is NOT, is a tool to blame “white man” or to “blame industry”.

The Red Dress Campaign was hijacked by radicals like Molly Wickham and Freda Huson, it was then picked up by Eco-Radical Organizations. This pair does the complete reversal on taking charge and responsibility for the violence against women compared to the real Chief Smogelgem. (See lower section of this page)

Nothing and I say nothing will ever take away how horrible or ugly it is that within Canada we have so many victims of rape, murder and the countless women still missing.

What I can say is the eco radicals are using outright lies to sell race hate and insinuating that these crimes against indigenous women were done by white men. The facts speak for themselves, brutal, horrible ugly facts and we do have to deal with it, one way or another.

Learn the facts! It is by knowing the truth we can stop these lying jackasses from telling the world a pack of lies about the victims that they seek to use/abuse for their cause.

Below I will copy paste some facts as submitted to the “Missing and Murdered Indigenous Women” Enquiry.  Please note I am only posting a few highlights, this would be a several hundred page document if I posted it all. Also take a close note at how often they identify non aboriginals as the cause.

Now quoting from other studies done independently of the Missing and Murdered Indigenous Women Enquiry,  pay close attention and you will see how the Eco-Radicals alter the truth and facts.

Like so many of the “agenda” aboriginals who milk the blood of the victims who died as a result of nothing to do with pipelines or oil, they all hide that most of the deaths that were resolved show that the perpetrators were mostly aboriginal as well.

There are many public lists of murdered and missing indigenous women in Canada. The Star compiled those lists into a single database then set out to verify as much information as possible. Relying on newspaper clippings and court documents, the Star’s database includes 1,129 names, dates and, when a case was solved, some information on the offenders.

A Toronto Star analysis suggests 44 per cent of the women were victims of acquaintances, strangers and serial killers. This finding is based on a Star review of publicly available information on more than 750 murder cases. Of that number, 224 murders remain unsolved.

There are many public lists of murdered and missing indigenous women in Canada. The Star compiled those lists into a single database then set out to verify as much information as possible. Relying on newspaper clippings and court documents, the Star’s database includes 1,129 names, dates and, when a case was solved, some information on the offenders.

Our review found 420 cases where details of the relationship between victim and offender were known. Some of them date to the 1960s. Of those:

While we have Eco-radicals working towards creating race hate to stop the pipelines, we have people like the real Chief Smogelgem fighting to end the violence within the aboriginal communities. That is true leadership, when you recognize the problem at home, and work towards solving that before accusing others of something that is mostly an “at home” issue. Chief Smogelgen aka Gloria George authored the series “Breaking the Cycle – Ending the Violence against Women and aboriginal communities”

In support of the We Can BC Campaign, George participated in an interview program called Breaking the Cycle. A project of the Justice Education Society of BC, Breaking the Cycle featured Indigenous leaders speaking about violence in their communities. George told personal stories and spoke about Indigenous identity, violence and abuse, and the ongoing intergenerational trauma of residential schools. She also offered advice on ways to break cycles of abuse, part of which, George argues, involves reconnection to Indigenous identity and heritage.

This is where First Nations need to be headed, how can they heal when the problem is greatest within their own community? As Gloria says “Its time to break the cycle” not with a fist raised in the air with defiance, but with humble recognition that we all have a role to play in ending the violence, not just against women, but children, elders and all members of our community.

Addendum; Feb 19th 2021 to show how Molly and Freda stole and abuse the campaigns intent.

The tree was created by Trinity Harry, 17, Ojibwa Nation, from Little Black River, Manitoba and Joseph Ginter, 16, Ojie-Cree, from Garden Hill, Manitoba, students at the Russell Vocational High School in Winnipeg. The project was supported by the Arx & Sparx Welding Camp Program and the CWBwelding Foundation with sponsorship from LNG Canada. The company is supporting welding camps for young people to introduce them to a career in the skilled trades. 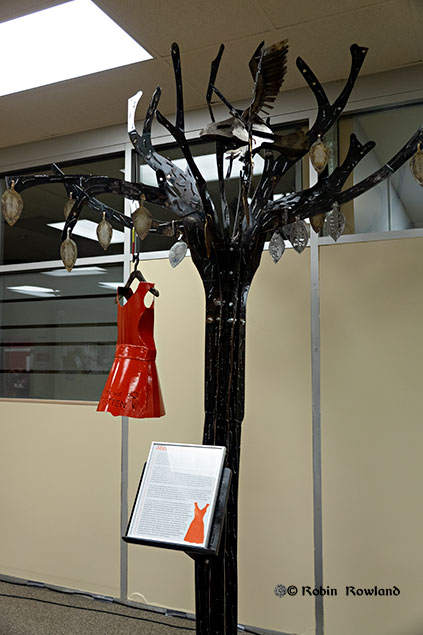