Again this organization is NOT a Canadian charity or NGO, they are in a nutshell the kind of scum we all should avoid. These are the people who make a career out of undermining democracy and are the backbone of anarchy. 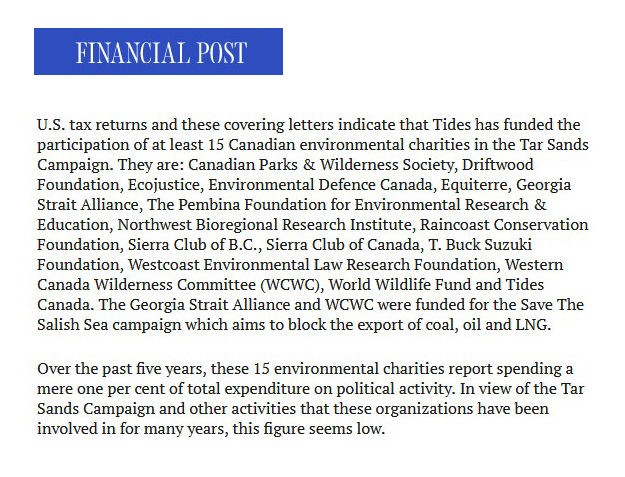 NOTE: This group financially interfere by sending money to Canadian Eco-radicals that are in our back yard.

The following comes from a website called the The Risk-Monger

The most lamentable zealot activist group, by far, has to be SumOfUs. This “anti-interest group” interest group claims 15 million members and will show up anywhere hard-left anti-corporate opportunities may arise. They are a good example of the new generation of activism – small, quick, moneyed and unaccountable. Their employees work in digital communities from their living rooms around the world. Without a core central office, SumOfUs has evidently not developed an internal culture. Such a culture is important if you wish to instill values like honesty or fairness. Without an internal culture, you risk having a group of semi-independent activists running around lying their asses off.

This New York-based group has mastered the art of crowd-funding at the micro-level asking large numbers of followers for small donations of a couple dollars per issue campaign. Of course their real money lies in foundations with deep pockets like George Soros, but they’d rather keep that quiet and pretend that you and me (the golden “we”) are truly the ones speaking up for humanity. The “office” has grown rapidly, but of the 36 paid staff, 16 have nothing to do with issues or campaigns (mostly software engineers and data analysts). These cadres merely follow the numbers and implement the ICT tools to harvest donations. They take the same models and just plug in different alarmist vocabulary to whatever issue the data tells them is lucrative.

I saw the extent of how SumOfUs was hated by the scientific community when I shared a link on Facebook to their campaign to force the German rail company to stop using glyphosate to control vegetation along the rails. The herbicide is used to prevent train accidents and potential loss of life from poor visibility and hidden obstacles on the tracks. SumOfUs did not provide an alternative safety solution to protect more than 33,000 km of German rail lines. None was needed as their focus groups assured them this dogmatic purity would work well among the generous German flock.

Glyphosate, Monsanto, Bayer and neonicotinoids have been favourite money-spinners of this activist pit-bull, so it should come as no surprise that the Risk-Monger is on the SumOfUs mailing list (making me, gulp, a member or “OneOfThem”). But something happened yesterday that set me off.

“The Death of Bees”

I receive many emails from SumOfUs, and quite frankly, I am always fascinated, not only by the narrative they have locked themselves in, but also at how they try to manipulate and exploit their own followers … squeezing the innocent and confused for every nickel and dime they can get. Yesterday I received an email with the Subject line: The Death of Bees. “Oh dear,” I thought, “… that sounds rather dire. I had better go and have a look at what just happened to the hardest working species on the planet!”

Well, nothing happened, but that’s not the point. What I found was an email so cunningly crafted, so exuberantly exploitative and crassly manipulative that I thought it would be a shame not to do an analysis as a blog. How many millions of people received this email? How many shared their nonsense on social media? How many donated to their campaign of falsehoods? It boggles the mind. And as I have been working on a blog entitled: “How to talk to your sister-in-law at Christmas” (due out in November), I can imagine many people are regularly frustrated receiving messages like this sent to them by caring loved ones (“Share if you Care!”). Maybe, I thought, this blog could help wake up some of these sister-in-laws.

First let’s examine the letter before presenting some further evidence of how truly despicable SumOfUs are.

It all comes down to “you”!

The opening of the letter, before we even get to a salutation, is in bold, screaming out the key message of fear and urgency: