In the above photo Corey Jocko is screaming at a CGL employee.

Its all about theatrics, creating the illusion of violence, where there is really none at all. The take down of a shooter loose in the streets of Vanderhoof recently was no different than the take down of people who had guns on site at the blockaders camps.

In a never ending succession of words like genocide, murdering women and children being hurtled at society, we are the bad guys and they are Bambi and Pocahontas being led off to slaughter.

Did Molly or Frank Alec really expect that police would leave their assets at home and come there and compete in a shouting match with Mohawk warriors?

How many times have we read caution violent footage, murder, torture and endless dribble going on and on and on.

I need to share some screen shot with you as a reminder. There are hundreds of them out there, but we just posted a sample below. 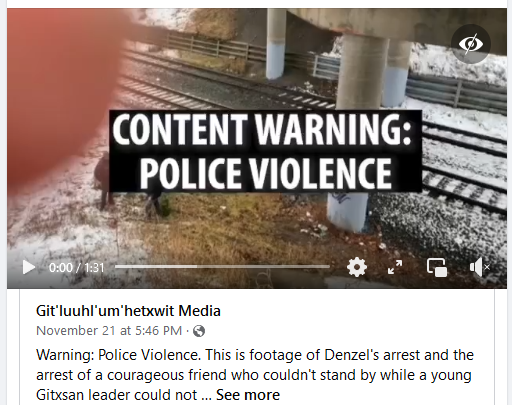 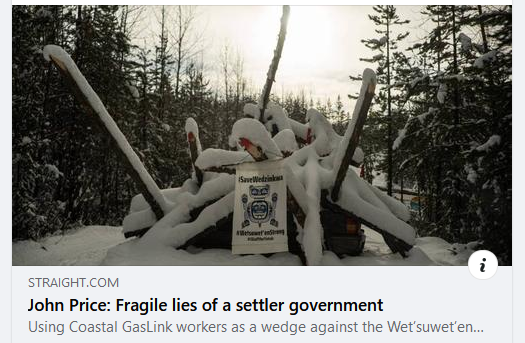 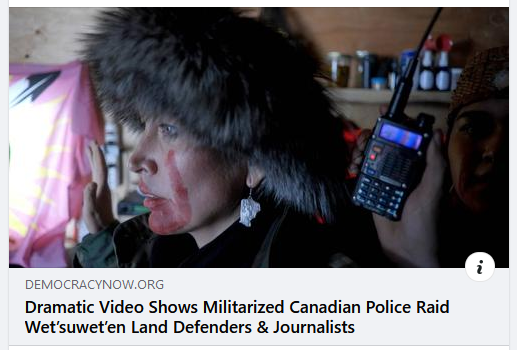 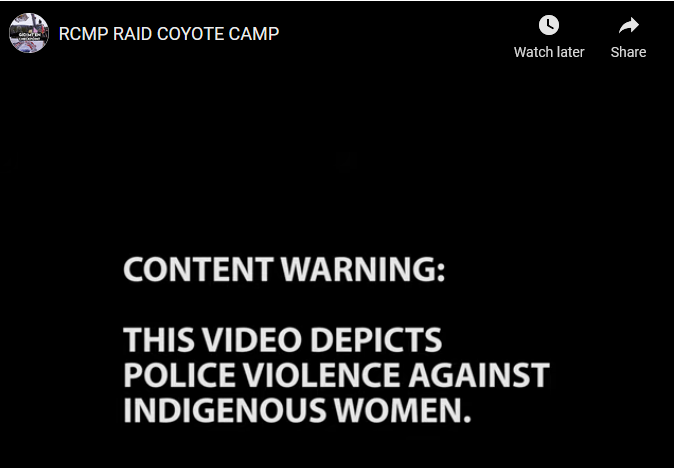 Recall how the Mohawks came here and ran the RCMP off the lands as they declared belonged to Chief Woos. Then i have visions of Custer’s last stand at the Battle of the Little Bighorn. The bragging about how they ran the police off their territory, then in the dramatic showdown it was instant surrender without a fight. Oh you showed them alright, you sure put the police in their place.

Remember this? Boy did you ever put the run on the RCMP

Who would have expected that

Not just once, they did it again, these are really fierce warriors, we have to take that threat very seriously right? Fact is they all just quit as soon as they saw police arrive with their working gear on. Now the police are the bad guys, and they now have everything labelled as violent, but what they were doing was so very very peaceful, sarcasm intended.

Who would have expected that when push becomes shove they all did the instant surrender?

Then there was this one, who can forget Cory Jocko screaming into the face of a man who looked near retirement age like a raving lunatic, warrior cries remember?

Seriously at least the last time Molly and her gangsters were able to hold police off for about 45 seconds, in this round they quit before they got started.

Other than being over equipped for the job this was a very peaceful take down without any violence at all, so its mind boggling how they can turn this into something that needs parental guidance due to the violence involved.

Words like “galvanizes her nation” and “dramatic new footage” and “CONTENT WARNING: POLICE VIOLENCE AGAINST INDIGENOUS WOMEN” and “RCMP violently raided” and “For 56 days, Gidimt’en land defenders (under the direction of Dinï ze’ Woos) re-occupied their ancestral Cas Yikh territory” and ““The RCMP’s use of force on this day will become roundly criticized as excessive as a response to a small collective of peaceful Indigenous pipeline opponents.” and “he RCMP’s arrest of journalists” it just keeps going on and on, and so does GoFundMe now donations have passed the million dollar mark.

Remember this? Flashback. Wow did he ever put the run on CGL, they ran off and never came back right?

And still we are reading headlines like “Wet’suwet’en hereditary chief says RCMP raids and courts orders won’t stop pipeline blockade” and the next day he says the opposite in a radio interview with CBC Radio where he says he will respect the wishes of his people. Listen to this clip taken from the CBC interview.

Then you have these phony journalists who have signed contracts with Molly’s camp, who originally planned to do a documentary called Yintah but lacked the footage so a raid was needed, now they have footage of a full surrender, not exactly what the plan called for. Now according to CBC ” Toledano was working on a documentary commissioned by CBC’s The Passionate Eye at the time of his arrest.” Now I am not a conspiracy theorist but its a damn good plot to insure he won’t get busted, and forgive me if I feel its a bit suspect since coming out after he finds out he will be having a hearing into his contempt charges. I am sure they will dig up the proof they need to back that up.

You know the saying, the show must go on, well folks, if you thought it was over, sorry to disappoint you. From Molly and her gang comes this one yesterday.

“As we approached a bridge that ran parallel to the Wedzin Kwa, a sacred Wet’suwet’en river, we spotted a checkpoint manned by two Royal Canadian Mounted Police (RCMP) officers. With their faces partially covered, they shone their torches into the truck, asked to see the chief’s driving license and demanded to know what business we had being on these roads.
Gis’day’wa informed them that he was the hereditary chief of this land, and the officers left to radio their superior for instructions. The bones of the chief’s ancestors are buried here and the ancient trails of the Wet’suwet’en clans’ war and trade weave through the vast territory, but now he must ask for permission to enter it. After a 10-minute wait, that permission was granted.”

Left unsaid is that they had Amber Bracken with them and they were going there on a salvage mission to their so called Coyote Camp, she has a detailed account on her Twitter account, note we cannot insure if it will remain there or if she will delete them. We did screenshot them. 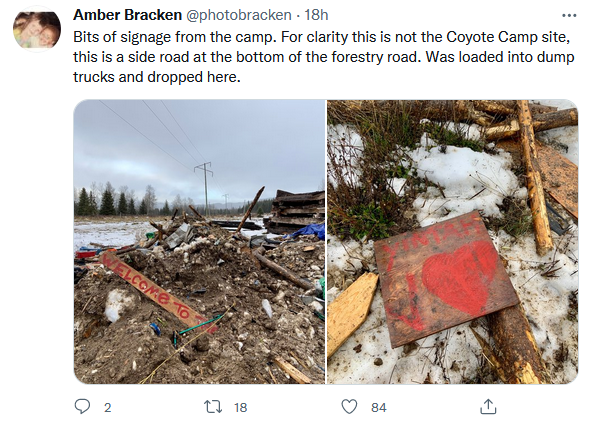 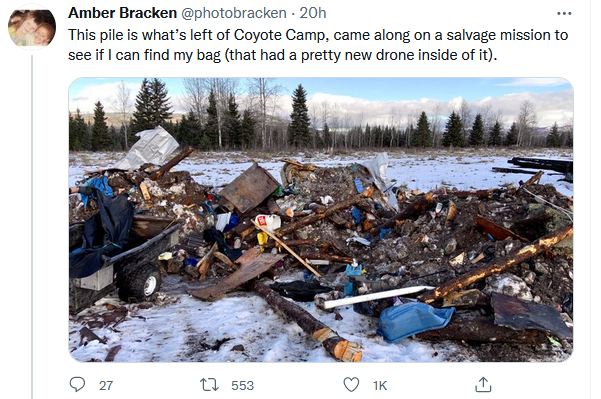 She even had a drone in camp. 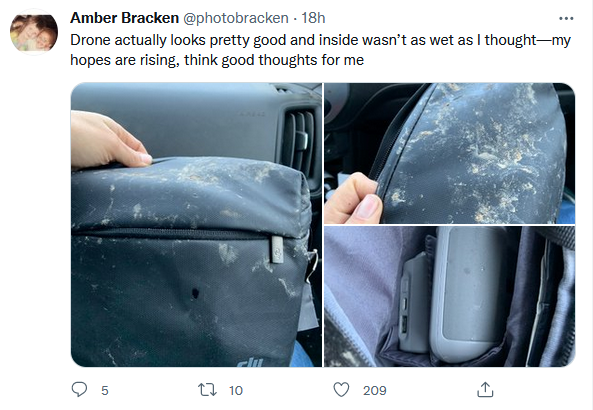 Then recall Cody Merriman saying he was wrongful arrested, well they were foolish enough to prove even that was a lie. They keep selling the story that they are the victims of aggression, yet here they are always showing they are the aggressors.

Last but not least is the video footage of the raid, ZERO resistance, footage taken from inside the Molly’s hut at the drill pad site.

In the above video Molly is obsessed with the words ‘fucking this and fucking that’, what kind of a lady talks like that? Is this what they call ‘Wiggus Tset At’awt At’en’ (Respect First)?

The insanity does not end there, now we have Taylor Bachrach putting the proverbial knife into the backs of all aboriginal nations in the Northwest

But he is not alone as the only political hack jumping om the anti RCMP bandwagon. He found his roots in the NDP under Nathan Cullen but today aspires to run his own political party, and he wont support anyone who strays from what he declares to be the only gospel truth. Looks like he took a page out of the NDP handbook and has distanced himself from all First nations people and places himself in the same ranks of only supporting the chiefs who do not want a democracy, they want a dictatorship, sound familiar Darcey? 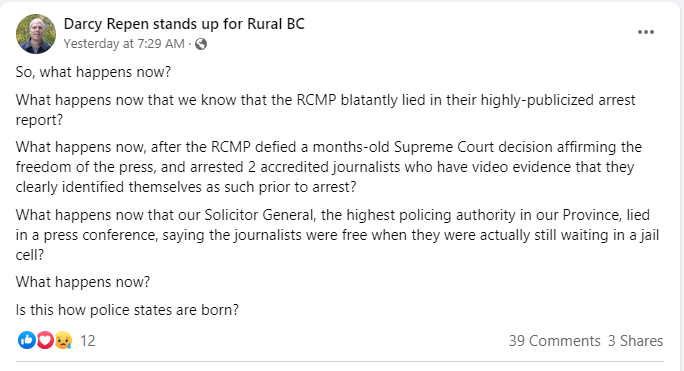 Note to Darcey, watch the Michael Toledano video that confirms what police said, they did NOT identify themselves until after they were placed under arrest. The video is the last one in this article.(RCMP RAID COYOTE CAMP)