For those of you who are not familiar with our Anarchist Stool Bus and the Stool Masters Awards, back in December 2021 and again in January of this year we published similar pages to counter the misinformation campaign by anarchist outsiders and a few highly paid local radicals. It should be noted that its only a small fraction local Wet’suwet’en involved, we prove it, see this study done to prove who is behind this effort to deceive Canadians.  The people behind the CGL Blockades.

I should clarify here also that this is not just incidental misinformation, its highly calculated propaganda created by trained paid trained experts to manipulate public opinion. Telling outright lies is a perfectly acceptable action, the end justifies the means, even if it means burning down, blowing up, sabotaging and then pretending you are the innocent victims.

The method of choice is not to push the tree over, its to chip away at the truth until the truth falls like a tree under the bite of an axe. Many of these bites are not worth an entire article to be written, so like before we will award the best “axe bites” with a Golden Turd Award and update this article when needed.

The nonsense from Molly continues with a total disrespect for Wet’suwet’en culture, she butchered a traditional song that belongs to another clan, Molly continues her rampage if hijacking the Wet’suwet’en culture. She did not even use the original words, she insults the Laksilyu with her parody version of  “Hewon Shun” that belongs to “House on a Flat Rock”.

Once again Molly shows her ignorance of the Wet’suwet’en culture while pretending she is the wise beyond her years matriarch when she is really just an over aged adolescent teenager that refuses to grow up, refuses self discipline and refuses all authority above her. With that we award her the with Golden Turn Award for being such a delinquent. 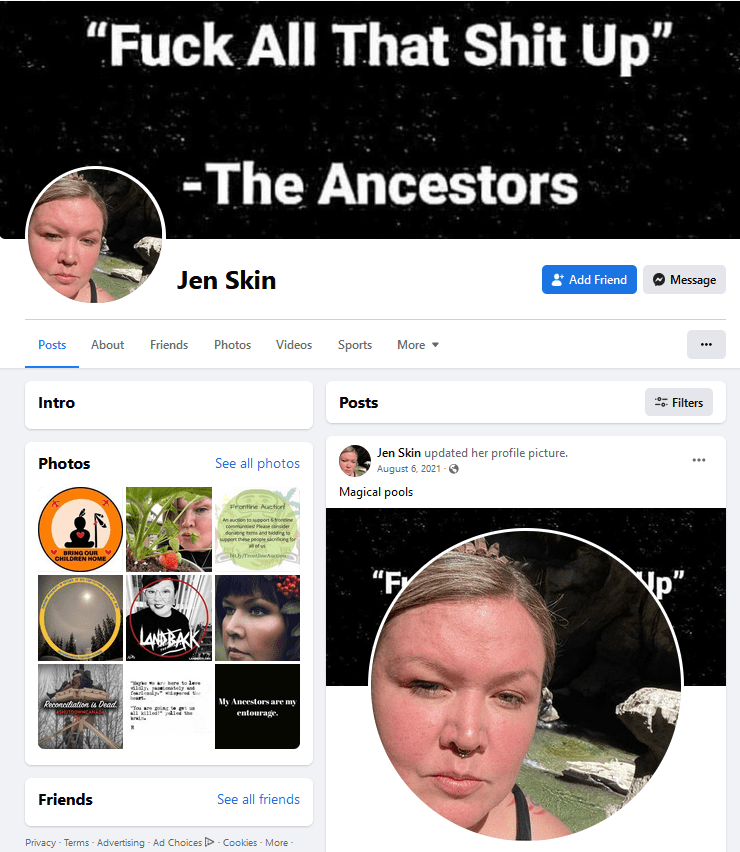 The Golden Turd Award goes to Jennifer Wickham and her Gidimt”en Checkpoint page. (see proof) her mother confirms it by bragging the point in this photo. The name Jennifer Skin is another alias used by this fraudster. Look at the language, is that what you want to call a matriarch or a lady?

Seriously, they were watching you many times before and had no fear to send in large contingents of RCMP to insure that the worksites were cleared of radicals, and considering their history, all of it was recorded so the facts will not get tossed aside by these propaganda specialists. They are really catering to the idiots out there that believe what these non Wet’suwet’en shit disturbers are doing. Two of the Hereditary chiefs are not even members of the Wet’suwet’en Nation. Gidimt”en Checkpoint the Facebook page is actually the sister of Molly Wickham, her name is Jennifer Wickham.

Rightful title holders? Jennifer Wickham? She is a status Indian from Stellako she was born and grew up near Fraser Lake.

Jeff Brown a resident from Burns Lake (Lake Babine Nation) not Wet’suwet’en, Jeff Brown worked at Babine Forest Products (Burns Lake) for pretty much all of his adult life and in his retirement could easily afford to buy his title within the Office of Wet’suwet’en.

Frank Alec Frank Alec is not a true Wet’suwet’en but holds a status card that says he is Lake Babine Indian Band member after all he was born and raised as a Lake Babine Indian. He wears the stolen title of Chief Woos that belongs to Hereditary chief Darlene Glaim.

Molly Wickham illegitimately adopted into the Gidimt’en clan, she grew up in the Stellat’en First Nations close to Fraser Lake, so definitely not raised on Wet’suwet’en territory or Wet’suwet’en culture. (Also famous for her man camps slogan but allows rape to go unpunished.)

Jennifer Wickham, had her education paid for by the Stellat’en First Nation. Stellako is located 160 kilometers west of Prince George, B.C. Stellat’en (people of Stella) born and raised as a Stellat’en.

As for fear of solidarity blockades, Justin Trudeau made it clear he will invoke the war measures act if anyone blocks infrastructure again, good luck with that.

Its all about motive, the money and GoFundMe, and soon that will be cut off also, under the same usage of the war measures act. Justin set a precedent going after the truckers, so the public will demand equal treatment.