Let me start in a very unapologetic manner, it was the Liberals under then Gordon Campbell goverment who failed to uphold the law, allowing the then small group of anarchists to illegally block the road in 2009 and in 2010 allow the construction of the first illegal log cabin to use as a means to break the law. These are not opinions, they are facts. Since then the Liberals allowed them to expand to the point of putting up enough buildings people might rightfully call it a resort for anarchists. And to this day, none of them were done with a permit, they have no permit for sewage disposal, and in the event the building collapses and kills a lot of people it will be the liability of the BC Government.

It really bothers me that the RCMP agreed to call it a healing camp, playing right into the hands of those breaking the law.

Now on to the chief problem, pun intended.

Somehow the year slipped my mind (age does that) there was a meeting held at Hudson Bay Lodge. The meeting was chaired by Nathan Cullen, and spokesman for various parties were there to represent their interests on LNG. On behalf of the Office of the Wet’suwet’en, was representative David DeWit.  The meeting was very courteous and information until the point that I am sure David turned a new shade of red, when Freda Huson and entourage came it yelling and screaming that nobody in the room had a right to be discussing this issue, carrying cardboard protest signs demanding we all end the meeting.

That day I recall I was highly impressed with Nathan for not simply calling the police but instead negotiated a right for someone in that entourage to speak. Someone did, and I will leave it to others what they thought of that speech, or rather accusations, I am not even sure if that speaker was sober, but visibly many aboriginals in the room were quite embarrassed, as were David’s parents who were both present.

There were between 50 to 100 witness to this event in the room.

So it begs the question of evolution, how did the Office of the Wet’suwet’en, non-apologetically cross the floor to the side of supporting anarchy? The key lies in a change in who the chiefs were, then and now.

Considering that the un-elected chiefs that do not represent 99 percent of Canada, or 99 percent of First Nations and still can have such a profound influence on our lives, it would be fair to say they owe us a lot more transparency.

Meanwhile we will have to do the best we can with information out there, or submitted by readers who happen to have an inside scoop.

Around the time Enbridge Northern Gateway was the number one problem in the Bulkley Valley, we were all told to beware of a wolf in sheep’s clothing, that wolf was Pacific Trails Natural Gas Pipeline. We were told and likewise repeated by Hereditary Chiefs at that time, that they would first put the line in under the pretext of natural gas, then later switch it to bitumen. It resulted in almost everyone who opposed Enbridge automatically opposed all natural gas pipelines.

This also resulted in a decision by the Hereditary Chiefs at that time, that they would not allow any pipeline at all through. It was not that they opposed natural gas, they justifiably feared that once the line was in it could be switched in terms of contents. (Now we know that is not true, hindsight is 20/20)

During this time we were all very concerned about oil tankers, it was a fear that gripped the entire northwest.

Well that answer comes in two parts, in particular who the Hereditary Chiefs at that time were, as well who ran the show at the Office of the Wet’suwet’en Society.

Back then in 2011, there was a different set of directors within the Office of the Wet’suwet’en Society

Likewise there were different Hereditary Chiefs

Here is the list published for 2015 (we have not been able to locate a more recent list.) 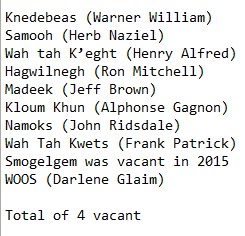 Considering (Namoks) John Ridsdale’s declaring that they stripped 3 women of their blankets (hereditary title) it begs or screams the question of forced loyalty to the side opposed to the pipelines for LNG, in particular CGL or Pacific Trails.

Right now it looks like the boys club just booted out the competition.

Here is a list (above) of who they were back then, this is important as it explains why the office went from supporting the law and framework within the law to now openly advocating support for hard line resistance.

Bear with me as we are covering a time shift and power shift spanning 18 years.

The key to the shift was the unfortunate passing of members (elders) in the George family, who were all strongly opposed to taking illegal actions and chose the path of brilliance and excellence over violence.

Chief Smogelgem (Gloria George) worked closely with Iona Campagnolo who was the Federal Liberal MP for our riding in the 70’s, under the goverment of Pierre Trudeau. It would be beyond reason to believe she would have allowed the growth of an anarchist movement within the Office of the Wet’suwet’en. It was under  Pierre Trudeau in 1973 that foundation for the negotiation of land claims and self-government became a reality.

It is highly unlikely Gloria would have been able to negotiate with Iona Campagnolo to get the funding the Office of the Wet’suwet’en in their early years. Most of the work back then was done out of what used to be called the Indian Friendship Center, using an old house turned into offices.

In an online article Gloria George also talked about how alcoholism destroyed her family, a painful reminder to me on how I lost one of my closest friends and allies.

Chief Smogelgem (Gloria George) was not only the voice of reason, without a doubt she was the most educated member on the entire slate of Hereditary Chiefs. Gloria was probably the key to making land claims become a reality for the Wet’suwet’en people.

As of 2011, she was pursuing a Master’s degree in First Nations Studies at the University of Northern British Columbia. In 1972, George was elected the Native Council of Canada’s secretary-treasurer, a post she held until 1974, when she was elected vice-president of the organization. From 1975 to 1976, when George was president, she became the first woman to become an elected leader of a major Aboriginal political organization. In 1980, George was appointed, alongside Charles Paris and Renate Shearer, as a commissioner of the British Columbia Human Rights Commission.

I could add so many more accolades for Gloria, so it becomes even more painful to see who is taking her place as Hereditary Chief. This man who was very young in 2014 already declaring himself a Hereditary Chief taking that very name Smogelgem.

Note this is the first and only time we read that Warner Naziel has a wife by the name of Freda Huson. Now I do not care if they are a husband and wife team, but I do wonder why they go through so much effort to hide it. Imagine all these years, all the press time and not once referring to each other as husband and wife, what gives? What are they hiding and why?

He was front an center of everything until his mom passed away, since then he has completely dropped off the public radar, why? Considering he took an active role, even during his mothers time in hospital, why has he ducked under cover?

Now pardon my ignorance but how did the chiefs name (Smogelgem) go to Warner Naziel, one would think there are ample qualified men in the George family that have all the ability to carry out the legacy Gloria started.

Nevertheless based on what we can find is that Warner Naziel might be the next in line, but was never officially named to that position.

See the article from April 2014 in the Georgia Straight, clearly someone is lying through their teeth.

So it brings us back to what changed in the Office of the Wet’suwet’en who now declare, or more specifically Namoks (John Ridsdale) vehemently declares, they are our people, they did what they did on our behalf, and we will stand by our people.

But our story does not end just yet, there is more to tell. In a community that suffers so very much from physical violence against women what follows goes near beyond the believable.

I am going to take you back to what I said earlier, (Namoks) John Ridsdale’s declaring that they stripped 3 women of their blankets (hereditary title) it begs or screams the question of forced loyalty to the side opposed to the pipelines for LNG, in particular CGL or Pacific Trails.

In an effort to curb violence against women, the BC goverment, working with indigenous women, the Provincial Ministry of Aboriginal Relations and Reconciliation (MARR) helped create a Wet’suwet’en Matriarchal Society. In June 2016 the men’s club would have nothing to do with it, in fact they took the following steps.

below is a copy of their explanation.
June13-2016-WHC-PRESS-RELEASE

Anyone with more information or correction please feel free to contact us.