At first it appeared like a case of “impaired posting” when we witnessed Warner Naziel (the stolen Smogelgem title) declare that the Wet’suwet’en had reached a consensus on a land claims process they had negotiated between the Federal and Provincial governments. However 3 out of the 5 clans have indicated that they have yet to come to a decision on the agreement. The Office of Wet’suwet’en shut down due to COVID, explained that everything would go on hold, the clans could not meet to adhere to the rules of Covid 19 and the need to social distance, in particular for sake of the elders.

Now it appears that COVID 19 has become the smokescreen for the same group of 5 chiefs to hide behind, and make completely untrue statements about reaching a consensus. Looks like they went from stolen titles to stolen consent, makes one wonder what they will do next?

Knowing full well that the clans could not hold any meetings to refute what the 5 Chiefs have done, it comes down to very dirty politics by a group of greedy old men. For the “Office” to proceed this way means they no longer are asking the Wet’suwet’en people for their opinion, they have decided for them what their opinion will be.

Its also hard to know if the NDP role in this, is a case of dumb and dumber or if there is conspiracy involved.

Are the NDP that stupid they do not know what the elected Wet’suwet’en officials are saying, that they represent the nation based on one vote per Wet’suwet’en adult vs 5 grumpy old men imposing their ideals on a Wet’suwet’en Nation.

In a letter elected leadership makes it clear the people did not vote in consensus to support the Wet’suwet’en Office Chiefs, see the letter below. 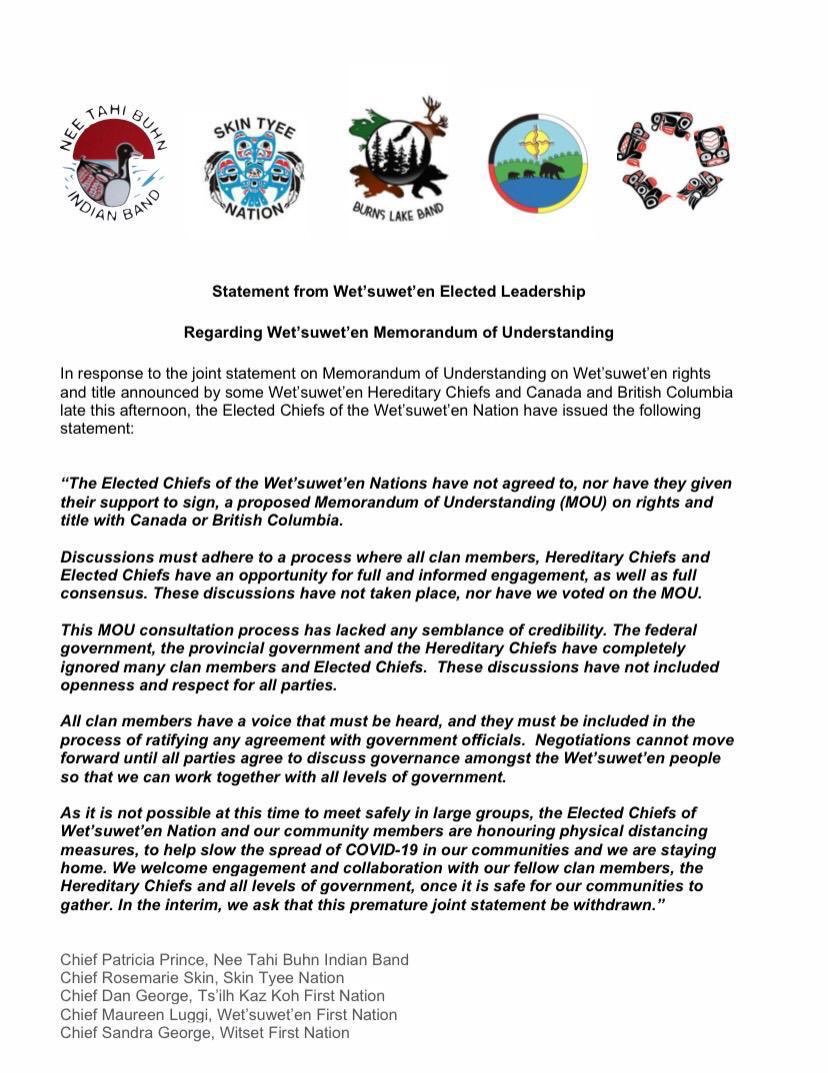 So where does this leave us now, having spoken to a number of matriarchs who live in Witset, all are saying no meeting ever occurred and are dumbfounded at the governments complicity in this deal that is supposed to united a nation, as opposed to what appears more like an attempt to destroy it. In an effort to spin the truth these same chiefs now say the meetings were held on Zoom, however they cannot even come up with a list of those who were represented via Zoom or any other social media. This is a very dirty game them are spinning on the Wet’suwet’en Nation.

Now we are talking about a deal between the Wet’suwet’en people (who are not allowed to decide for themselves if they support the deal) and the people of both British Columbia and Canada who also are not allowed to see the contents of this deal. The secrecy about what is in this deal should be setting off alarm bells all across our nation, both the Wet’suwet’en people and everyone who is a citizen of Canada will be forever tied to an agreement they are not allowed to see. Why is the visible truth such a threat to both British Columbia NDP and Federal Liberals? Why the need to hide it from both nations except the “chosen few?”

OH inhale before you all say WTF is going on here?

OK I did not expect to write that, but its fitting for the occasion. Having boldly made the last statement, I will try outdo myself however I say this very seriously.

Note the words in the above statement and remember, the joke is on you and me, a lot is being said and done, but it is most certainly NOT the ways of our forefathers.

ADDENDUM: There were only 35 Laksilyu (Small Frog) members who joined the discussion on April 22nd at 2PM, not even close to a quorum, less than 25% of eligible voters. The largest representation came from the Basil family being close to 1/3rd of that group.